VP9 [with bridge support] soon cometh! Do a happy dance! 🕺🏾

Okay, I’m probably more excited than I should be, but hey, who really has the rights to any meter on excitement?

WARNING
Let me warn upfront that THIS IS STILL EXPERIMENTAL. Don’t take anything I say here as the Jitsi Dev Team’s official stance; this is just me sharing my finding from an experiment, using codes that have not been fully vetted yet, nor formally released.

Now I’ve gotten that out of the way, let’s look at the fun stuff. If you’re somewhat familiar with codecs, you know that VP9 offers improvements over VP8. Jitsi has never officially supported VP9 (as far as I know), but in previous versions, it was possible to enable it, with some limits and caveats. In my quest to get the best quality possible, I’ve been bugging the Dev team to point me in directions on how to enable it - understanding the many limitations that exist in its current state (won’t work on Safari on older macOS, ios and even some other mobile devices). Well, it finally paid off!

SUMMARY
I was able to enable VP9 with bridge support using @Jonathan_Lennox’s PR. This involved using code that’s not been officially released or committed. The results were unquestionably fantastic!

BRIEF OF STEPS
Again, this is not officially released yet, so I did so at my own risk. I downgraded to an older version of JM to skip enhancements made to the current versions (which are somewhat incompatible with the PR). Going with instructions from @Jonathan_Lennox and some help from @bbaldino, I built a new JVB as well as the Jitsi-media-transform jar it depends on (from @Jonathan_Lennox’s PR) and dropped those in my installation. I then made the time-tested changes to jicofo for force VP9 and disable VP8.

RESULTS
First, I confirmed it was actually using the VP9 codec by checking on webrtc internals.

Client Impact
I checked the impact on client machines using the weakest machine I have available (Client4). My findings with 4 clients (Client1, Client2, Client3 and Client4) were as follows: 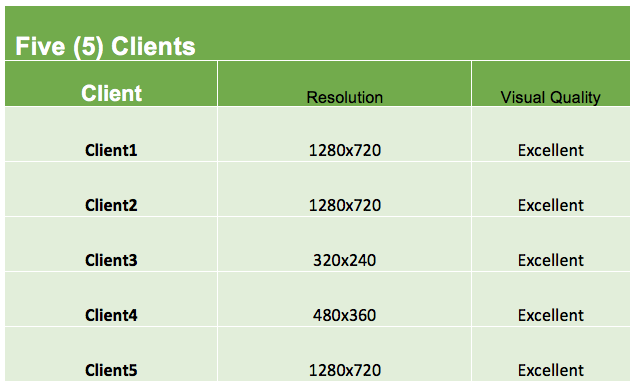 And to me, since no test is complete without getting Jibri’s blessing

, I invited Jibri to join the meeting and recorded for a little over a half-hour. Alas, Jibri was happy too! No undue memory or CPU spikes.

I simply turned off the camera on Client3 and turned it back on and everything went back to normal (in fact, it came back with a better resolution - 480/360). Not sure if this is at all related to my VP9 implementation because I think I remember having the same issue once or twice before this.

CONCLUSION
I am BEYOND excited at my findings! Like I mentioned in my previous post detailing my tests, VP9 on Jitsi is definitely the way to go. The difference is so glaring, once you experience it, you’ll never be satisfied with anything less!

Now, I must excuse myself because I need to get some friends on a Jitsi call to do our happy Jitsi dance.

Hey,@Freddie thanks a lot for sharing your experience with the community!
Would it be possible to gather the exact steps in this thread (like specific commit hashes that you had to revert to, instructions for building the JB and the jitsi-media-transform, etc)?

I tried to follow the Flagship VP9 thread, but there’s outdated information all over the place, where things didn’t eventually work out.

Thanks again for summing up your experience in this game-changing update! It’s really inspiring to see that Jitsi can match the experience (or provide an even better experience) of the closed-source alternatives!

@Freddie I followed below steps for docker. How to verify its VP9(it is showing vp9 when I hover over connection-status but it is because of jicofo)

I’m also using this PR for Jicofo to enable VP9 and disable VP8 and H264 at jicofo level.

Call and Voice quality were superb and CPU consumption was low. I tested it with 4 participants.

@metadata you can confirm it’s Vp9 through chrome://webrtc-internals/. You’ll see the codec there listed as VP9. ios (iPad and iPhone ) does not support VP9 yet; even older versions of Safari don’t support VP9. These are constraints from Apple, not Jitsi. I generally don’t use Firefox on my Jitsi installation because it’s just rife with issues. VP9, like I implemented it, is still experimental, so I’m using it in a very controlled environment (Chromium-based clients - including the Electron app - and Android).

Maybe I’m missing something, but I don’t understand the point of those figures if you don’t show the corresponding figures with VP8.

Yes, you are missing something (somewhat). Check my previous post (like I referenced in the conclusion) - it will show you the numbers I got doing a similar test with VP8 (and even Zoom). -Platform Comparison - Zoom vs Jitsi (VP8, VP9); A comprehensive Test

Besides that post, I think what’s being highlighted here is the quality. The difference between VP8 and VP9 is simply incredible. 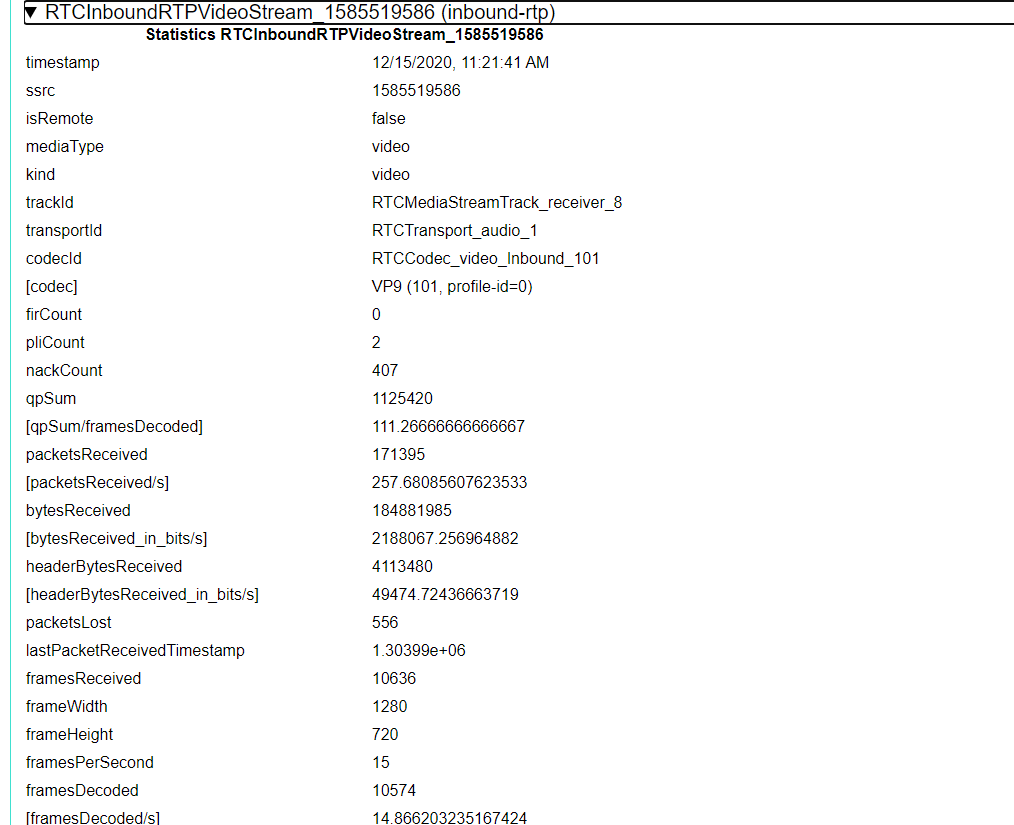 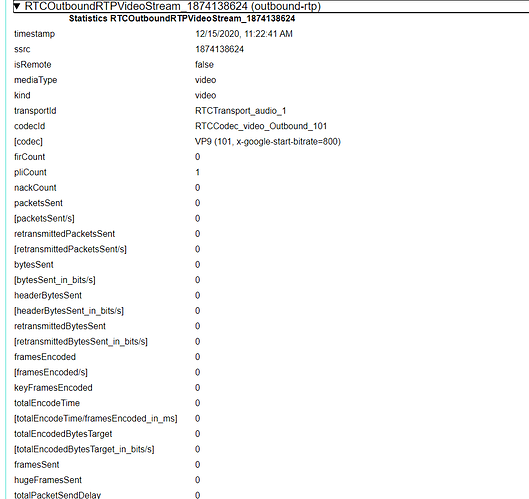 Here In step 4. Do we have to explicitly replace jitsi-media-transform like below?

Here jitsi-media-transform-1.0-203-g67b9a7b.jar is the jar file present in jvb container by default. I’m confuse here whether we have to replace it or not? I tried both by replacing it and not replacing it, Both the time I can see VP9 in webrtc-internals.

You could be right, I’m not certain. Building the fat jar of JVB pulls in all its dependencies and that may very well include those referenced in the media-transform jar (again, I’m not 100% sure of this). However, it’s important to note that the reason why we need this new JVB isn’t just to get VP9 (jicofo configuration alone would have done that), it’s to get VP9 AND SVC through the bridge. The JVB we’re building has a jitsi-media-transform dependency, that’s why we build jitsi-media-transform (from the PR) and then the JVB.

No, you don’t need to change the jar name for media-transform to match the one in your installation. Just remove that one and replace with the one you built. For JVB though, you need the names to match.

Hey @Freddie thanks for the reply!

Even though all of the steps were completed successfully, I cannot seem to get the jvb running.

I get the following errors in the jvb logs

Thanks so much for sharing. I too am very excited to get proper VP9 support (with SVC) working in Jitsi.

Anyone know when we can expect this to be released (in unstable) so we don’t have to hack around to get it working?

One more question. A lot of my friends are heavy users of iOS, so I need to have fallback codecs (VP8 or H264) for when they join.
From what I gathered, right now VP9 is all or nothing deal, but I do hope when this lands in the unstable repo that we can configure a codec priority list with VP8 and H264 as fallbacks. Anyone know if this will be the case?

Anyway, thanks again for sharing your findings Freddie. Much appreciated.

@Freddie thanks for your sharing, what the whole bandwidth consumption on upload and download for this test? I see only consumption per user.

@Peter_Villeneuve it sounds like it’s pretty close to getting there, but I don’t have any definite date. And in fact, the concern you have about the fallback to VP8 is the primary reason why the devs haven’t pushed it out. They are absolutely bent on making sure that fallback works so a whole demographic of users is not cut out from using the upgrade.

@Yassine I didn’t actually write down the stats for bandwidth consumption for the server, but I noted it was generally better than on VP8. To be frank, my biggest concern was the impact on the clients since the often-touted downside of VP9 is the heavy CPU demand. Interestingly, I didn’t really see this in my tests.

I get the following errors in the jvb logs

@slack0, I have the same error in the jvb logs:

Error: Could not find or load main class org.jitsi.videobridge.MainKt

Did you manage to find the issue ?

Thanks @Freddie ,I see that only 5 persons, consumes a lot of resources in term of bandwidth.

How does this compare with VP8, do you know?

I thank is too much that five participants consume in Download : 600Mbps and Upload: 1.5Gbps.
it is too much, imagine if there is 15 persons in the meeting how much bandwidth you need?!

I’ll write down a series of steps that got it working for me.
The following instructions were tested on a hetzner cloud vps (CPX11 2 vCPU, 2GB RAM). Keep in mind, I had trouble with building the project in a less powerful vps.

Before you start, make sure you have installed mvn and unzip packages.

I’m not sure if the next steps are optimal but they worked for me in multiple tries from a clean start.

Restart the videobridge service service jitsi-videobridge2 restart
You should not see any errors in logs tail -100 /var/log/jitsi/jvb.log

After a few test calls with some friends, I cannot say that I see any big improvements over the VP8 videobridges. TBH if I didn’t see this indication[1], I wouldn’t even notice the change. I’m not sure if SVC is enabled or not, or if there’s any other way to test that the whole installation was successful. Right now I’ve only attached videobridges built with the above instructions (and stopped old VP8 videobridges), plus I enforced VP9 through jicofo config.

Feel free to report any findings on this, but right now if you also care about Safari support, I think sticking to VP8 is a no-brainer. 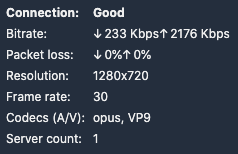