I’ve been trying to get Jitsi up and running, so far wasted about 5h

So what I do have is an ESXI Host where I set up an Ubuntu 18.04 LTS VM and just updated it, as well as installing Apache2, thats it.
(I went with Apache because no web server and just using the default install didn’t work at all and failed with installing/setting up nginx-core twice so I went and purged it)

Now with Apache installed before installing Jitsi again it went through the installation without any Errors and seems fine, the hostname for this test is just “ubuntu64”, which shows up correctly in Ubuntu and ESXI.
I installed Jitsi according to this guide: https://github.com/jitsi/jitsi-meet/blob/master/doc/quick-install.md
Which as said ran though without any problems.
But my problem is that when I open the IP of the vm I only get greeted by Apache’s default welcome page.

The first installation I tried including the settings in /etc/hosts for FQDN and Lets encrypt as described, Jitsi itself is completely stock, and I used ubuntu64 as hostname during the installation.
I also tried not doing FQDN settings and not lets encrypt (after a purge), but that didnt change anything at all, still shows me Apaches welcome page.

It is okay to have /etc/apache2/sites-enabled/ with ubuntu64.conf AND 000-default.conf, right?

I really dont know what Im doing wrong here, or what else I’d need for it to show me Jitsi…
I hope someone can help me through this as Im actually lost at this point, there were a few google results showing how to configure Apache but that also didn’t change anything

I was thinking, maybe I should have put in the IP of the vm into the jitsi installation instead of using the hostname? but I kinda doubt that would change it

(Also trying to open with https://ubuntu64/ doesnt get me anywhere in the local environment

thank you,
stay happy and safe 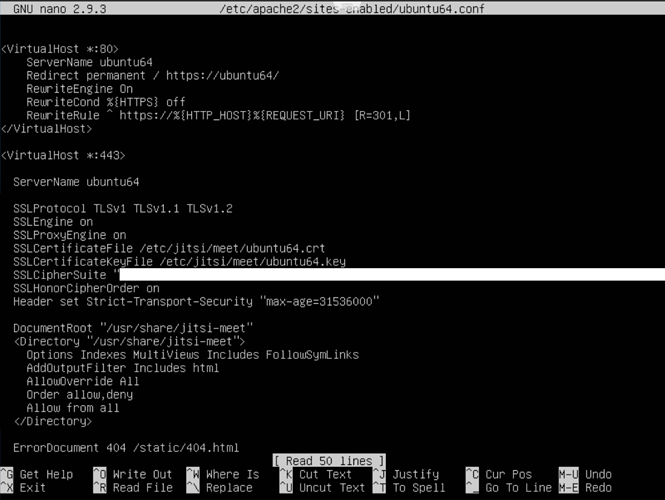 Okay I figured it out… the issue actually was the hostname, I purged once again and set Jitsi up with Apache but used the VM’s IP now instead of the hostname, but this way it works!

Now off to figure out the hostname stuff…

Did you end up discovering how to use hostname? I’m having similar issue, when I try to browse my Jitsi server I go directly to the Apache2 default web page.