Before, the recording was saved in Dropbox and the screen was recorded as the point of view of the viewer watching the meeting (especially the shared content and if only the camera was opened).

Until 9/9/22 it was that way and it was going well. However, some changes were made and I noticed some issues.

The fact that the recording can be downloaded locally is great, but the option “save recording file locally (beta)” seems to be mandatory as the button doesn´t turn off. If I keep only this option on, the recording fails, on any chosen tab.

If I choose to record the entire screen the recording also fails.

If I choose the Jitsi window and select the Jitsi screen, it also fails the recording.

The option ”record only my audio and video streams” records only the audio.

The only option that records the video and audio is by selecting the internet tab, but it is as if it were the screen recording, which does not show what I share unless you click “show me what I ́m sharing” (and even then, the content does not fit the entire screen). The recording is not made as if it were the viewer’s point of view, as it was before.

I’m not from IT, unfortunately, so which option should be selected for the recording to be made as before, that is, as the viewer watching the meeting (with audio, video and speakers)?

When Jitsi Meet used Dropbox for recording, everything was working perfectly. With the changes nothing is working, nor the recording (or there is failure, or only records the audio, or the audio presents reverb) neither to view it (the webm extension can not be viewed in Google Drive. Probably it´s needed to download the file and use a program that can read it.
Is there a possibility that we will at least have the old option operating again, even with the new implementations?

We have disabled Dropbox recordings on meet.jit.si. You can still enable them if you have your own deployment.

When doing a local recording, you first need to share the tab where the meeting is running, because THAT is what it’s going to be recorded.

Thank you for your comment. Can you expand about the “tab sharing” you mention in your second paragraph? This solution will record what is received by the audience?

It will show what YOU see on your screen, since it’s capturing your screen.

Thank you for that. It is possible to work as used to work before? Saghul mentioned in his first paragrap “…You can still enable them if you have your own deployment…”. Can you point to some instructions to achieve that?

You’ll need to deploy Jibri and do this: Web integrations | Jitsi Meet

Thanks for your reply Saghul!

The issue is not with the place where the recording is stored (local or Dropbox), but rather the way the meeting is being recorded by jisti.meet.si itself (web), because the only currently possibility is as a screen recording (screen capture), that is, what I see on my screen, and not as it was before, where it was recorded what the audience received.

I don’t know if it’s related to Dropbox or if I’m not being able to select the right option.

Sorry, but it got a little bit confusing for the user to select the correct option.

That’s the issue Freddie. I have no choice but to record my screen, right? It is no longer possible for the recording to be made as it was before, as the audience received.

For now, server-side (jibri) recording has been disabled on meet.jit.si, only client-side (local) recording is enabled. However, if you’re hosting your own server, you can of course continue to record with Jibri.

That’s not exactly correct. We do a TAB recording, not your screen. We record the way YOU see the meeting.

Dropbox recording required a server component to join the meeting to “observe and record”. We have currently disabled that for meet.jit.si, so now YOU are the one observing and recording.

+) How are the hardware requirements for the new recording option (server, client) to save on my client?

+) If the recording gets interrupted, will the recorded file be saved/be available till interruption or is the record lost?

kind regards,
MS
If I remember correctly with previous Jibri recording on server a quadcore with 8 GB RAM was recommended.

+) How are the hardware requirements for the new recording option (server, client) to save on my client?

The new option is local, there is no server involved.

+) If the recording gets interrupted, will the recorded file be saved/be available till interruption or is the record lost?

Should be saved, yes. 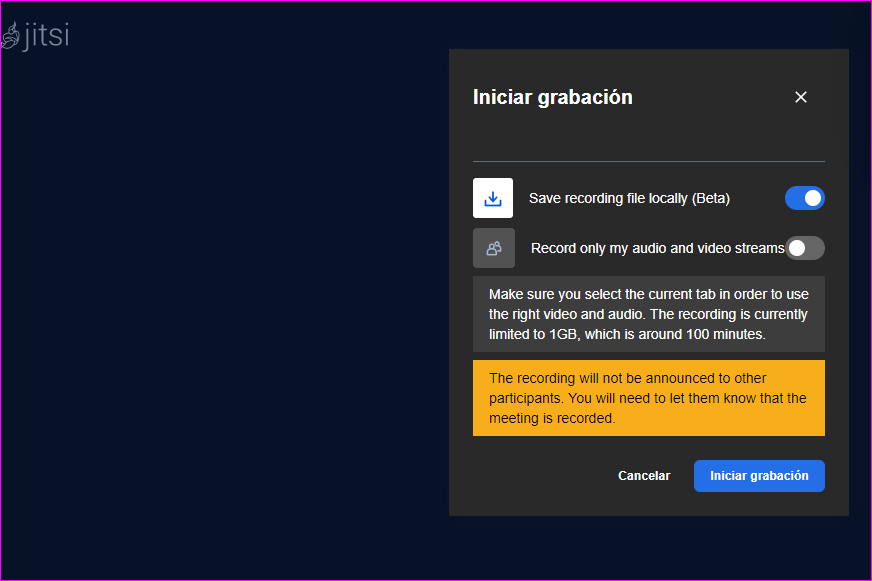 Me temo que tendrá que formular su pedido en inglés… (I am afraid that you will have to pose your request in english!)

To clarify, given that there’s no server, this is now identical to using a local screen-recording tool like SimpleScreenRecorder right?

Even the audio from others will only be recorded as well (quality wise) as it is heard live on the local machine. Right?

how to disble that save recording file locally(Beta) option in new jitsi version it is not stored in the server as before.