all separate machines and VM’s and all machine are not cloud hosted, I have the physical machines.
and I’ve looked at a variety of posts on the subject including:

Hello everybody o/ I try to setup Jitsi meet in my DMZ with meet.domain.tld. I follow the guide here : Self-Hosting Guide - Debian/Ubuntu server · Jitsi Meet Handbook When I start new room and I join with anothers clients, both from LAN and WAN, nobody can see and hear each other. I have a firewall which do NAT to an nginx reverse proxy. UDP test (Tip: how to check UDP/10000 connectivity) work great, both from LAN and WAN. My reverse proxy setings : location / { proxy_pass…

and on other websites: 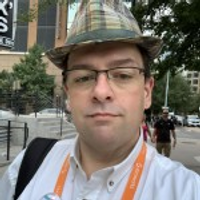 Anyone using Jitsi behind Nginx

I setup Jitsi on a VM in my colo. I routed the full 10k-20k UDP ports to it, as I have nothing running there needing them right now, but i cannot do that with 80/443. Opened a post over on the Jitsi community also....

but still cant get it to work; I get to the web end but I cant start a room, I’m simply unable to progress from the welcome page. I suspect this is because i cant get all the back end web processes through the RP but I’m not sure what I’ve configured incorrectly.

the Jitsi Nginx has remained the default.
I did do as this post suggests Jitsi meet in DMZ behind NAT and Nginx reverse proxy - #11 by Noreu and comment the ssl configs in the Jitsi Nginx config but it caused syntax errors so I decided not to.

ill post log as requested most have no record of contact but the main one of note is the /var/log/nginx/access.log on the RP which says “POST /http-bind?room=test HTTP/1.1” 502 559 “https:///test” which i believe to mean that http-bind returns a 502 and 559 error

in the end having Jitsi behind a RP is pretty common on most if not all work environment’s and the fact that i cant find much on it is surprising with how much of a no brainer this should be. I just want to be able to host multiple services on my network and if I have to give on a Nginx RP and move to a different program I will (HA proxy seems it might work) I’m also maybe overlooking some thing simple as most problems usualy end up being, but I greatly appreciate any help you can offer.

Check your prosody logs, do you see any errors there?

What do you see when you open it in the browser like this: Prosody BOSH endpoint

in short its empty, no connections.

hello I put /http-bind on the end of the domain as suggested to test the bosh endpoint and it says 502 bad gateway.

@thomas_wood Can share your nginx configs? (Never mind I see them now)

Also, I’m curious why you are doing it this way.

want to be able to host multiple services on my network

Maybe if you explained more about your setup it would help us understand better.

It should return something that says It works! ...

I’ve got the physical hardware so I want to be able to host multiple services behind my router specifically:
jitsi, nextcloud, mattermost, a my-sql database’s connecting to external devices. but I’ve not had any problem with those programs and this isn’t the forum for them anyway. I was using nginx for them but i might end up swapping to a different solution (maybe HA proxy) if i cant get jitsi to play nice with nginx.

sorry i should have been more clear.

today I set it up through the RP again and it replied to a /http-bind test with a 502 this lead me to conclude that there’s some type of fault with my Nginx config. a ‘nginx -t’ test says there’s no syntax errors.
I’m not sure what wrong with my nginx config.

thanks for the help

The above reply is not fine. It should give you a It Works! page, as seen here:

Keep in mind that’s correctly reverse proxied from port 443 to 5280 on Jitsi’s infrastructure.

when i put: domain-name/http-bind into a browser i get the its works page, when i type the command
curl http://127.0.0.1:5280/http-bind into the jitsi’s ubuntu terminal it gives me the quoted lines above, also its working fine when not put through the RP.

The localhost thing is normal, you have bosh activated for that domain only in virtualhosts in prosody.
So the RP is different machine which forwards to the nginx running on the jitsi-meet machine?

Hum. So for a request you get 502 on RP do you see that request on the jitsi-meet nginx in access.log?

Yep. You have two matching of http-bind for example … You need to better order them … I’m not so familiar with nginx matching … but yeah seems a problem in that nginx. Maybe you can find some examples from a community member by searching in the docker issue tracker open & closed ticket, I remember seeing one …