No audio for windows 10 user

I have a co-worker who has the strangest problem on jitsi.

He can use Meet, zoom, and all other videoconferences with his microphone and it works fine.
When he enters Jitsi, his microphone shows on the list of available microphones, but it does not send audio. The audio bar keeps static and he is just not making any sound.

I asked him to see permissions and its switched on. Asked him to checkout all the default things that could be causing this bad behaviour but nothing was found.

Weird thing is this problem happens only on jitsi. Not on any other videoconference.

Any idea on how can i find the bug on his system and solve it?

Do you have your own Jitsi server or meet.jit.si?

What browser and version are they using?

I have tested with him both in my own server and on meet.jit.si server
Both cases showed the same issue

On another system I had persistent problems with Chrom(ium) and none with Firefox. So browser matters (although there are only 3 browsers now, Chrome and derivatives, Firefox and Safari - this one don’t count on Windows)

i am trying to discover which browser he is using. I know its chrome. Not sure which version.
Will ask him to test it in another browser and give me the version as soon as possible

He also tested on Opera

Seems not to be a problem with browser. But he said it works with zoom and meet.

it would be more interesting to use Firefox since under Windows all other browsers compatible with Jitsi-meet are based on Chrome.
Also, could this person try a basic webrtc test such as this one: Audio stream volume

He tried your test. He said it didnt make any movement even though he tried to speak. 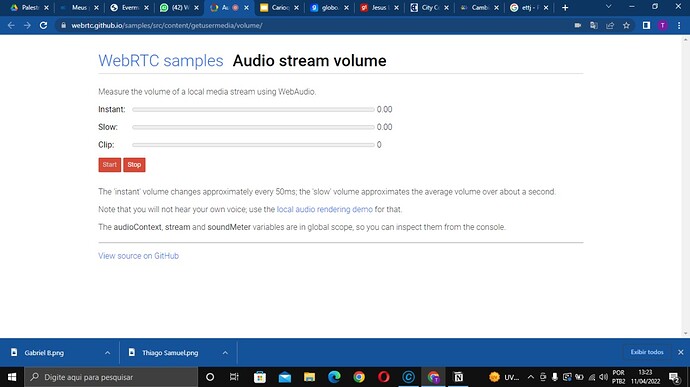 well, it should move. That’s not really a Jitsi-meet problem then, it’s a Chrome webrtc implementation problem.
Testing with Firefox… yes it works there too.
Can this person try with Firefox ? and Chrome in incognito mode while at it ?