Make it easier to select current tab for local recording

I think the new Local Recording feature is awesome, but admittedly the UX to start the recording is not great.

I’m aware this is down to browser limitations, and that things will get better over time as browsers evolve e.g. when features like getViewportMedia becomes available.

However I do want to get local recording in the hands of my users as soon as possible, so I’m exploring stopgap solutions. Here’s a couple of proposals:

Use of non-standard preferCurrentTab option

This isn’t widely available, but it does work for new-ish versions of Chrome. Setting this will offer a “This Tab” option which makes it a lot easier to select the current tab and not have to scroll through the full list of tabs. 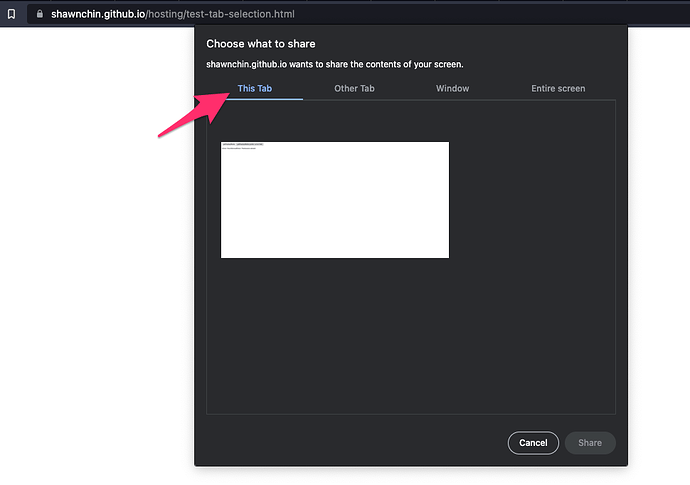 I’m assuming that constraint will simply be ignored on browsers that don’t support it, it which case things just behave as it does now.

Temporarily augment tab title to make it easier to spot

I found that the current tab is not always at the top of the list especially if there are multiple browser windows open, so choosing the right tab could be a bit of a nightmare when you have more than a handful.

Could we perhaps help users choose the right one by temporarily prefixing the title with something easily recognisable? 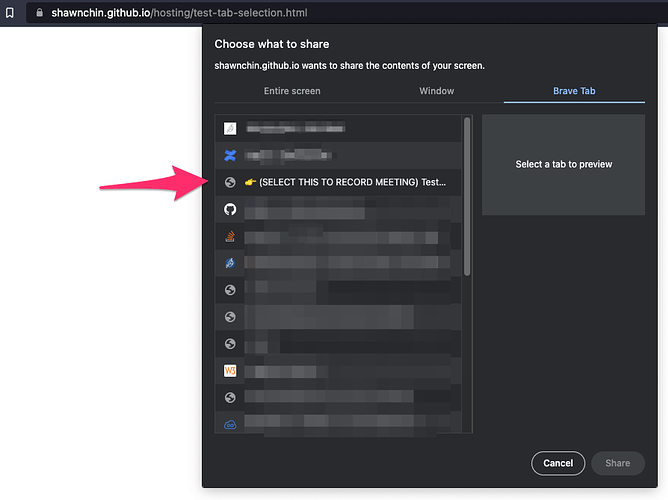 Here’s a quick POC that implements both: Test doGetMedia with preferCurrentTab

The preferCurrentTab is broken in Chrome, that’s why we don’t use it. It blocks the tab audio from going to the speakers. We opened a bug in Chrome but they don’t plan on fixing it. This will be fixed when the suppressLocalAudio will be introduced. Until then we can’t use it.
Here’s the chrome bug 1317964 - chromium - An open-source project to help move the web forward. - Monorail

Makes sense. I should have known you’d have already considered that and excluded it for a reason

. Thanks for link to the bug report.

What do you think about the wacky wacky proposal to temporarily augment the title for easy identification? It could be as subtle as prefixing with a

icon – it won’t be intuitive, but once users know it is there it does make it easier to spot.

I think it makes sense, but I’d rather let @saghul weigh in on this

I think it’s not a bad idea, we’ll discuss it.