Failing to Get Jibri to Work on Debian 10

This is my first time here, so apologies for any errors.

Since I am a new user, it will not let me post my jibri.conf, as it contains too many links.

I am not sure how to do this, as I cannot upload files, as I am a new user. Should I cut and paste them into a post?

First problem: in your jibri.conf, you have the values set incorrectly

This misconfiguration is repeated several times in the file. You need to fix that.

Also, those last logs show that it looks like ffmpeg was killed while running?

Thanks. I changed all the ‘:’ to ‘=’, and restarted everything, but still got the same result.

As I said, when I did not have strip-from-room-domain defined in jibri.conf, I got as long recording as I want, but it is not of the right meet (see attached snapshot), and recording fails after a short time when strip-from-room-domain is set to the correct value (“conference.”). From that, it seems to me that the chrome and ffmpeg are working, but I have misconfigured something so that chrome is unable to attach to the correct meet. 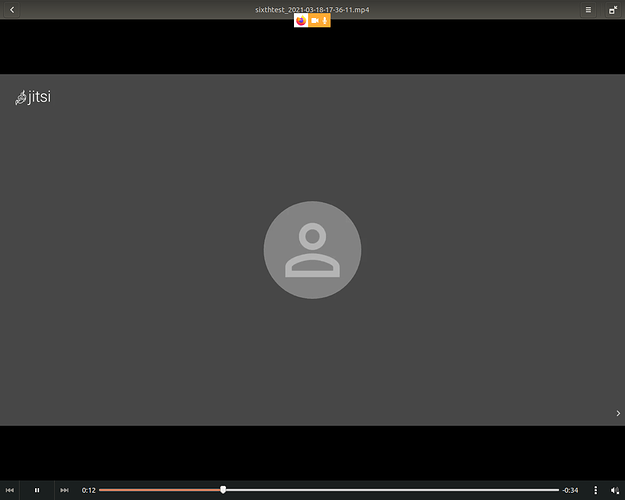 What version of java are you running?

Maybe clear your logs, restart Jibri, try to do a recording, then share the logs.

When I initialize strip-from-room-domain to ‘conference.’, recording does not start.

Check the status of Jibri service to see if it’s running.

I’m also on Debian 10 Buster. And initially I also couldn’t get recording to function, because I used java-8. But once I removed java-8 and installed java-11, the default in Debian 10, and followed the tutorial at TUTORIAL - How to Install the NEW JIBRI it works, except for the java-8 part.
Also note that if you have a password on the room, or have lobby-mode enabled, recording will not start, more info at Live streaming/recording (jibri) does not work if room has a password · Issue #659 · jitsi/docker-jitsi-meet · GitHub

Thanks. The tutorial worked very well, except I needed to use java-8, as java-11 resulted in an inability of Jibri (I assume) to gracefully stop ffmpeg, resulting in a corrupt video.
I also had problems with ffmpeg failing due to lack of memory. Though 2GB is the suggested minimum, I needed to upgrade to 4GB to keep ffmpeg from failing.