I was testing the installation of the latest unstable (7768) on Ubuntu 18.04 and saw the following failures:

The following packages have unmet dependencies:
jitsi-meet-prosody : Depends: lua-inspect but it is not installable

It looks like lua-inspect was a recently added dependency.

Alas lua-inspect apt package is not currently available in the official ubuntu repo for Bionic Beaver (18.04) and only for newer Ubuntu versions. 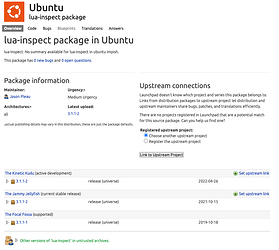 Am I missing something? Or have we inadvertently dropped support for Ubuntu 18?

Well … there were several modules already dependent on inspect but we did not have that dependency and as we add it to one more module I added the dependency.

And when testing deb packages we use 20.04 and 22.04 …
Not sure what is the best path here … as 18.04 is 4.5years old now …
We either say its not supported or we drop the usage and dependency… Or we can add some ‘| dummy-package’ to the dependency list for a workaround…
WDYT?

That makes sense. Better to make that dependency explicit than have it fail later.

Ubuntu 18 is indeed old, but it is still under LTS release so still officially supported. Although it won’t be long now before it reaches 5 yr and goes from LTS to ESM.

Considering dep packages are only tested on 20.04 and 22.04, I think it is safer to say that only those versions are officially supported. We can post workarounds on community for those than still want to use Ubuntu 18, but this will be best-effort and not guaranteed to work forever?

but | dummy-package approach might be easier if more people face this issue.

Any package to propose? libc maybe?

I don’t see a libc package but there’s libc-bin.

That said, I’m afraid I don’t have a much experience with maintaining apt packages so I don’t fully understand the implications of such a change. I will leave it to your good judgement and experience to decide

If you chose to leave it as is, I can post an alternative workaround (after I’ve done some testing with it).

Yeah I need to test it … will not happen today

We have a small warning about 18.04 in Self-Hosting Guide - Debian/Ubuntu server | Jitsi Meet …

On a barely related topic – I’ve noticed we also introduced a new debconf option for “jitsi-meet/jaas-choice”. Do we need to update the command in DevOps Guide (scalable setup) | Jitsi Meet to account for that?

Yeah, that will be nice.

For the record, I stumbled on another issue with installing on Ubuntu 18 – jicofo install was failing with error:

From my limited understanding, it looks like something (perhaps one of the debhelper scripts?) was calling invoke-rc.d with the --skip-systemd-native argument which does not exist in the Ubuntu 18 version but OK on newer versions.

This was unexpected since installs on Ubuntu 18 used to work without a hitch.

Anyway, I’ve managed to workaround this by using a backported version of init-system-helpers before installing jitsi-meet. Example:

you already have some workarounds posted here

Indeed. It used to but now it is not.

If anyone else need to get it running on Ubuntu 18.04, these are the workarounds I needed to use.

I wonder if it makes sense to continue supporting 18.04 at this point; it seems like it’s not generically compatible with the last few versions of Jitsi without additional patchwork.

I’m with you on that

Considering dep packages are only tested on 20.04 and 22.04, I think it is safer to say that only those versions are officially supported. We can post workarounds on community for those than still want to use Ubuntu 18, but this will be best-effort and not guaranteed to work forever?

I had to “sudo apt install luarocks” first, and there is a misplaced fullstop in “lua-inspect-dummy-template.”.

But so far it looks good. I will work on making a newer Ubuntu image for my environment, but this will do for now.