At present the list of known domains, which I presume is used for calendar integration, is hardcoded in source and this gets written to users’s localstorage along with actual deployment domain.

Not a huge deal, but it is not ideal that Jitsi/8x8 domains are referenced in a proprietary deployment.

Would it be possible to make that default domain list configurable? Or perhaps a config flag to specify default should not be used?

What’s your use case? This is indeed only used for the recent list and calendar screens, both of which are only available in the Jitsi Meet app’s welcome screen.

SDK users don’t see or use this screen so it’s kinda irrelevant, isn’t it?

If someone wants to deploy their own Jitsi Meet build to the store then they probably want to change this in addition to setting their own default server, at which ppoint adding a flag becomes moot, since you’d need to make code changes anyway…

Do you have a different scenario in mind?

We install using apt repo and try very hard to avoid having to maintain custom forks. Those domains don’t show up on screens as you’ve pointed out, but they do show up in localstorage. 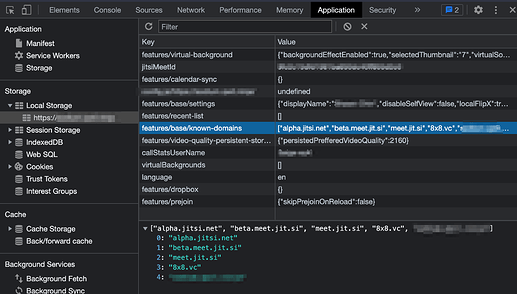 Do you have a specific proposal in mind? In general I’m opposed to making changes just for the sake of it…

Well, it’s not change for the sake of change. Having other domains referenced in local storage does cast doubt on our claims that the service is self-contained and does not send data to third parties. We know that reference is benign, but I’d rather not have to prove it to customers.

I don’t have a specific implementation in mind, but wanted to gauge appetite for such a change before investing time on a PR

Assuming it is possible, would you consider a PR which enables the default domain list to be overidden from config.js?

Is this a viable approach? I couldn’t see any other way around it since configs are not available at the point where the default states are set up.

Ref: https://community.jitsi.org/t/customise-default-known-domains/115964 Mak…e default list of known-domains customisable from config.js. This is currently hardcoded to jitsi/8x8 domains. Had to move the values from default state to middleware so we can defer it until configs have been loaded. Downside of this is that the order of domains could now be different since some `addKnownDomains` calls are triggered before configs loaded.

I’ll takee a look, thanks!

@saghul Any chance we can revisit this?

Sorry, been quite busy lately. Can you @ me in there so it pops up to the not of the notifications?