1000 participant in conference (only voice)

@cosmo83 I have not had time to setup prometheus + grafana, but it is on the todo list.
As has been mentioned in many threads, bandwidth appears to be the predominant factor, but it looks to me that CPU is also a factor to consider.
This is CPU usage on a 27 participant conference tested on c5n.9xlarge for JVB and c5n.large for Jitsi Meet (no JVB running). 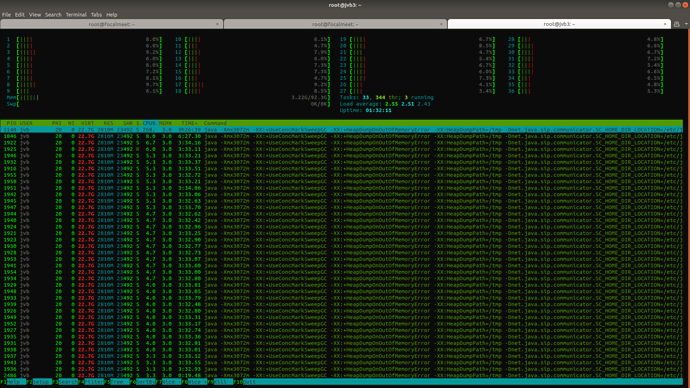 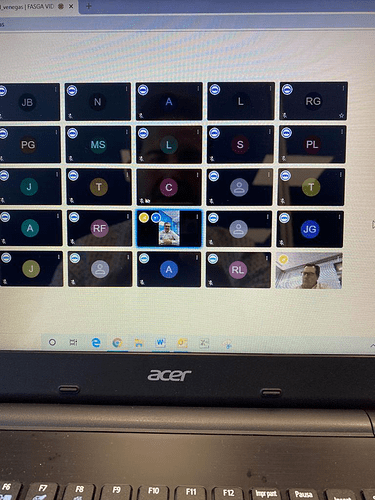 Just ran the tests for 10 streamers and the video looked pretty good for me. Also captured some prom graphs … 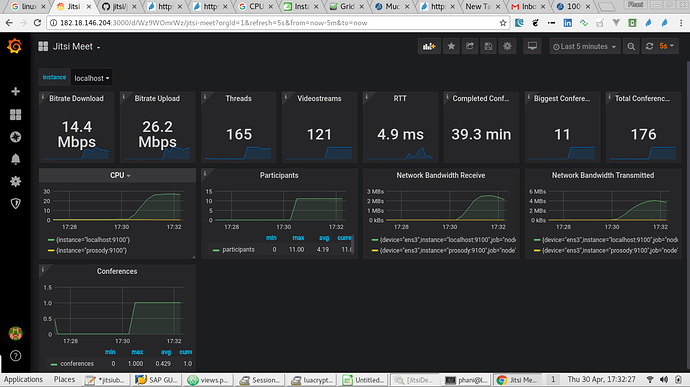 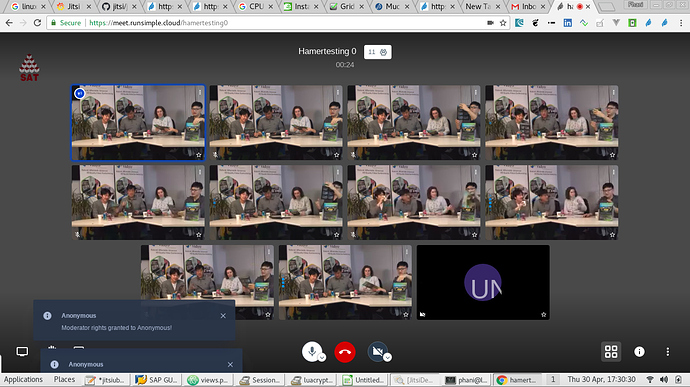 Hi @cosmo83, may I ask what SW are you using for Hammertesting? Official hammertest is not compatible wit recent JVB2 according to the message in git.

Loadtesting Jitsi Meet I needed to do some load testing on my jitsi meet instance to get a feeling for how many participants, audio and videostreams my JVB could handle. You can see my results (on a pretty outdated machine) here. Today (as requested by a few others on the forum as well) I’m going to describe my Setup and walk through the most important steps. While this would be possible on Windows as well, I’m going to focus on Linux as that is what I daily-drive and I think it is more conven…

I thought I might provide some feedback from experience.
I really appreciate the work that @damencho and the Jitsi team are putting in, my team is looking hopefully try to finally contribute back to their great work by investigating how to have OCTO run using a user load-balanced model, which is currently possible if you aren’t using OCTO. If you need to use geographic load balancing you can only currently do server-based load balancing.

We have a very stable build now.

We have a separate server for running jicofo, prosidy etc (this is a t3.medium) and we use c5n.xlarge for JVBs setup with autoscaling based on CPU usage.

We swapped this from network, because network usage is fairly bursty while CPU usage grows more linearly with the number of participants.

We have chosen 50 users on Last-12 based on experience from users plus testing results. 50 users on Last-12 results in a decent utlisation of end user cpus any higher than last-12 starts to use significant processing power and bandwidth. 50 person Last-12 conference will use ~ 1GB/sec bandwidth on your server. Hence the need for using network optimised c5n instead of the standard C5.

A 70 person Last-2 conference runs < 1GB/sec for your server (largest session we’ve actually had)
This will use about 80% of the c5n.xlarge CPU however.

Our experience says in Last-12 mode. Max participants is 50 using a c5n.xlarge (a c5.xlarge will sometimes run out of available network when network bandwidth spikes)

Last-2 mode. Max participants is 100 using a c5n.xlarge (the c5n.xlarge will run out of CPU usage at this point)

Note: because some of the considerations are actually the end users device, the reduction of video streams is partly to save their machines. We have also switched off the visual audio monitor too, as there were other reports from other threads around this being a problem. This is also really important to do, as your end user machines won’t support this.
(see - .High CPU utilization on client end)

Also of note, we also completely block all browsers that do not simulcast (eg. firefox) the lack of simulcast significantly disrupts large conferences due to the increased bandwidth consumption.
.

Hi,
Thanks a lot for your nice description.
I have additional questions to your settings.

Our system needs multiple different settings (not at the same time):

Thanks a lot for your answers
Kind regards
Ludi

My guess is a Last-2 configuration can theoretically go much much higher than 100 participants (but the c5n.xlarge will run out of CPU to process the attendees unless it running on a user based load balancing setup).

Of note - Last-N room configuration can be set programatically which is what we do.

thanks a lot for your fast reply. Your answer helps a lot.

Do you think it is possible to use channelLastN=2 with 1000 participants with the bigger server?

That I’m not sure. But this is just because end users still incur processing when aggregating the multiple streams. The impact of aggregating many audio streams to an end user is not something we’ve tested,

You could probably setup your site to have start with video off for all and run a testrtc test. We found testrtc a real godsend when working through our performance and stablity issues. This is also what jitsi use.

There are some challenges with using it, but i’m happy to share our experience too.

Hello, 2021.
Is it possible to create a big conference in Jitsi?

Thank you in advance.

Hi, just a ping for update…!

in the current community call, the Jitsi-makers say, that big conference will be available soon. In the call it is said, they make Jitsi ready for scaling up to 500 participants per conference. Interesting will be how much load it will put on every users CPU or if the programmers found a solution for making it ready also for older PC’s. That would be interesting to know.

I think that the key idea is here, that is, only transfer what is necessary. Usually a conference is not a meeting, you have no interest in seeing/hearing hundred of participants, only a few people such as an organizer and a handful of very important persons (invited) and possibly people asking questions (one at a time). So better optimization can save a lot of bandwitdh/channels. The only drawback is that general applause will be muted, so not so good for artistic events or political meetings. Maybe add a plugin for canned laughs ?

Yes, create a conference with two participants and stream the conference to youtube where you can have millions of viewers.

Hi @damencho
Thank you very much for your quick response. But this is not my requirement. Could you please tell me what is the maximum user count in Jitsi meet? If I add multiple JVB and enable OCTO then what will happen?

We are working to have 500 participants in one meeting.

@damencho have you succeeded? It would be great to know how to do that.